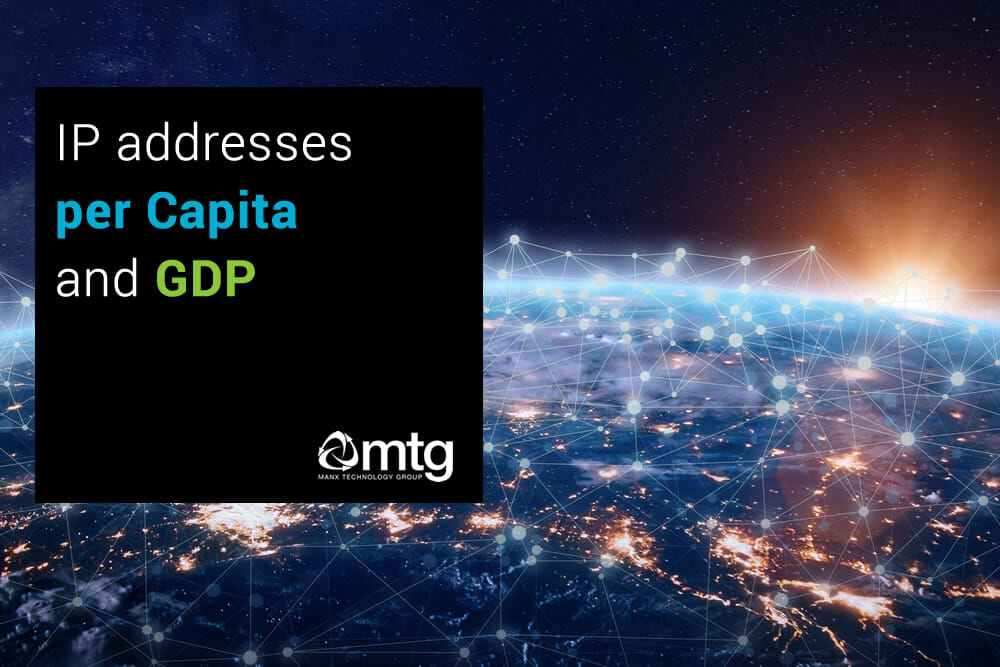 We love data at MTG, so we thought it would be interesting to investigate the number of IP Addresses per Capita for several Island jurisdictions (Isle of Man, Guernsey, Jersey, Malta, Gibraltar).

These jurisdictions tend to be associated with financial services and e-Gaming. For those not familiar with internet routing architectures, an IP address (in this case, IPv4) is typically associated with every internet connection, hosted device or server in said country.

Some devices may have multiple public IP addresses, and in some cases, there may be many users behind an IP address. Despite this, and all things being equal – it should still give us an interesting comparison between countries. For this exercise, we do not consider the use of IPv6 addresses etc.

The question was simple: Does an increased number of IP addresses associated with a country indicate a higher GDP per capita?

IP addresses per Capita and GDP

It turns out that we are not the first people to look at this. In 2017, there was a study undertaken by the University of Chicago and Monash University that identified a correlation between IP Address per Capita and GDP. The report is available here

The summary of the report stated:

… found a positive correlation between GDP per capita and the number of IP addresses per head.

A ten percent increase in IP addresses per capita was associated with an 0.8 percent hike in GDP, the analysis found.

A fascinating insight, but it does kind of make sense.

One would assume that an increased number of IP addresses per capita would suggest a more mature digital economy, which in turn is often associated with higher value economic activity. Again, perhaps a generalisation – but reinforced by their findings. 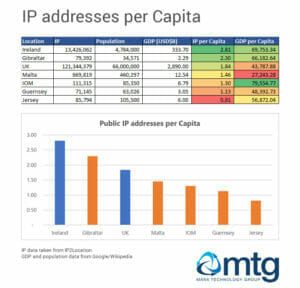 When you look towards Island nations, such as the Isle of Man, Malta, Gibraltar and the Channel Islands – how does the picture look?

Financial services and e-Gaming are vital contributors to these economies, so you would expect there to be a relatively high number of IP addresses per Capita (based on the report’s findings).

We used the following data sources:

You can view the data by clicking the image on the right.

For Island nations, the league table is as follows:

Now with the UK and Ireland included, Ireland is a clear winner.

This blog post is purely a topical look at data from a different perspective. There are many caveats, and this is not meant to serve as an authoritative source. The intention is to generate discussion and ideas.

What do you think?