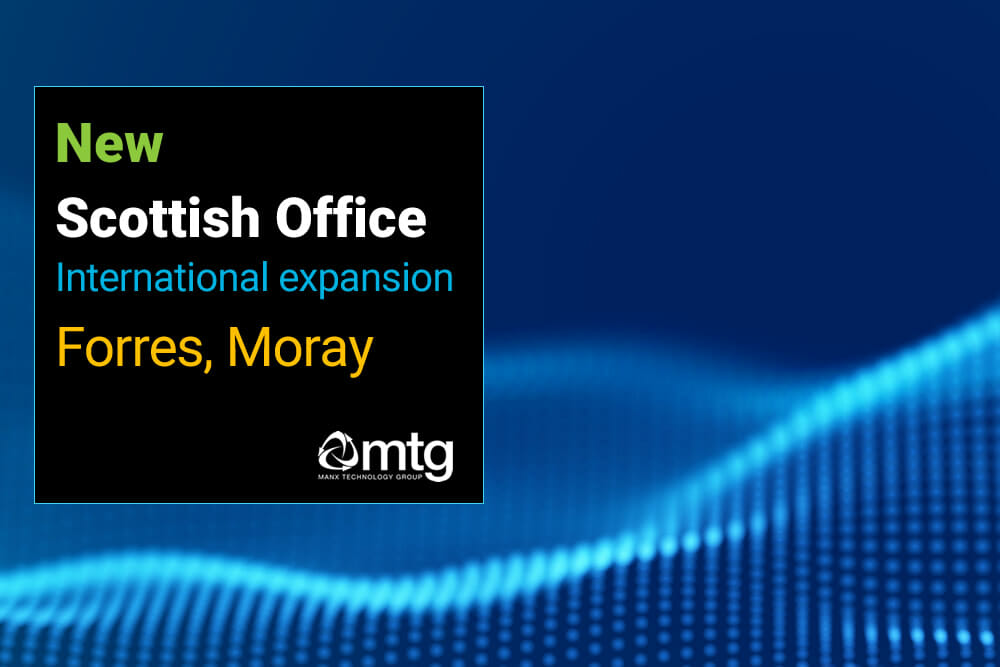 Manx Technology Group (MTG) has been working with an increasing number of customers, universities and institutions; in areas such as IoT, software development and managed IT. As a result of these opportunities, MTG has a growing reputation as an authority in IoT and is now working on several fascinating IoT projects throughout the world. To support its global expansion, service its international clients and to participate in the fast-moving emerging technology sectors – MTG is pleased to announce the opening of a new office in Moray, Scotland.

Situated in the Enterprise Park Forres, the new Scottish team will be working with their colleagues in the Isle of Man to provide IoT, technical support and help-desk services to MTG’s UK and international clients. The growth into Scotland has been nearly two years in the making, with MTG having previously evaluated other locations in the UK and Europe, before settling on the Highlands region.

MTG has been providing technology solutions from our headquarters in the Isle of Man for over 20 years. To support the next phase of our expansion, we considered a number of locations that would suit the needs of our growing business.

A key consideration was an environment similar to the Island, one that encouraged international growth, somewhere we could readily access and nurture talent, and a supportive location that fostered innovation, collaboration and partnerships with industry and Government. I am pleased to say that the Highlands region ticked all the boxes.

Working with Highlands and Islands Enterprise (HIE), and following introductions to organisations such as Scottish Development International, Skills Development Scotland and CENSIS – it became clear that the region had a lot to offer.

The Scottish Government has an ambitious digital strategy, and its eight innovation centres are focused on increasing the pace of innovation and encouraging the adoption of emerging technologies such as IoT, data and AI to drive economic growth. As an innovative technology company with international ambitions, creating a base in Scotland became an obvious choice for MTG.

MTG’s new location in Forres is a short drive from Inverness airport with easy access to Inverness, Elgin, Aberdeen, and the rest of the Highlands region.

Tools such as Microsoft Teams and video conferencing allow MTG staff to collaborate and communicate with their colleagues as if they were in the same building.

I believe partnerships and collaboration are the way forward. We are looking at ways in which we can promote collaboration between organisations and groups in both the Isle of Man and Scotland, leveraging the strengths of each, for collective gain.

Our Celtic heritage, community focus and a shared goal to innovate, develop and grow – as small countries in a competitive world, are supported by an understanding, respectful relationship and some common challenges.

I’m delighted to welcome our new team in Forres and I look forward to seeing what we can achieve for MTG, Scotland and Isle of Man.

Alongside the Scottish expansion, MTG is continuing to hire in the Isle of Man, with the head office adding four new help-desk members, while also expanding its back-office, administrative and engineering teams.

We have been very impressed with the welcome and professional approach of the HIE team. They have provided rapid and helpful responses to all our enquiries and given practical advice and support during our move to Scotland.

Above all, they share MTG’s enthusiasm for the contribution that technology can make to improving well-being in society and the philosophy of honest and open dialogue

John is enthusiastic about the opportunities presented by IoT:

Demographic problems of skill shortages and an ageing population, coupled with issues resulting from population growth and global warming have played a prominent part in our expansion strategies. These are universal challenges, but IoT offers realistic solutions to both.

The new technology enables effective monitoring and treatment of the elderly thus mitigating the shortage of nursing staff, while simultaneously improving care and treatment standards. Also, intelligent sensors that detect pollution, traffic and people movements, and many other key variables, provide dramatic opportunities to help with the battle against waste, pollution and to improve low rates of productivity.

I am delighted that Joe Hughes, our CEO, has developed considerable expertise and contacts, many of which are in Scotland which is a leading proponent of these innovative technologies.

My belief is that MTG’s involvement in these fields will play some part in resolving some of the difficulties involved with climate change and societal challenges, while at the same time creating useful opportunities for us to grow MTG’s UK and international business.