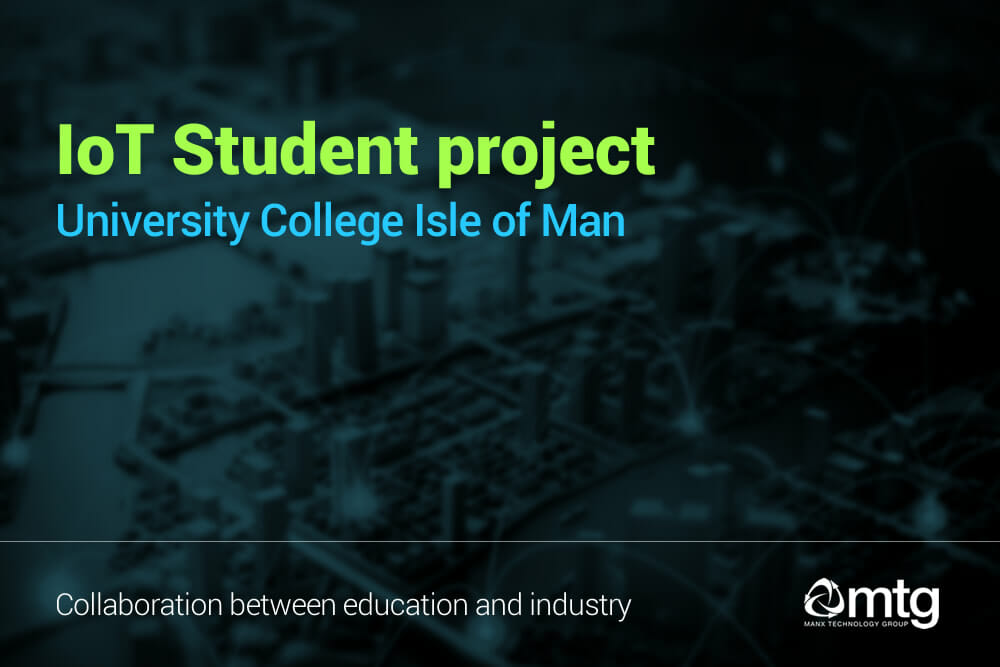 Computer Science Degree (BSc) students have completed the first IoT project at the University College Isle of Man (UCM). As part of the Experiential Learning module, the project seen students work with real clients to deliver a project within 6-weeks.

Through the IoT partnership with UCM, Manx Technology Group (MTG) provided the students with Libelium Smart Environment & Libelium Parking sensors. Students access the sensor data through MTG’s IoT cloud environment; as a result of using the cloud environment, the students have a platform to analyse the data in real-time.

Libelium Smart Environment Pro Plug & Sense unit has been installed on the UCM campus. This device captures various air quality variables and also particulates. Air quality samples are collected, and the data is sent via the national LoRaWAN network to the IoT cloud. Completely off the grid, these devices rely on power collected by the solar panel.

Working with UCM, the team researched, designed and developed a web-based IoT dashboard prototype over the 6-week duration. The prototype was developed using Microsoft’s ASP.NET framework, C# and Razer. User interface design principles had also been incorporated into the design, ensuring the data can be visualised and easily understood. Above all, the design provided a good user experience.

The team of students presented the project at the end of the 6-week timeline. The presentation included a complete walkthrough of the working prototype; also the development choices and the design principles implemented. Finally, the student’s explained the analysis and market research completed to expand their knowledge of IoT.

An impressive final prototype was developed that also captured the core fundamentals of good IoT dashboard design. The design effectively broke down data into easily digestible data points, allowing for quick analysis. The prototype checked off all the requirements set out by UCM, resulting in a successful project.

IoT is still an emerging technology, with the adoption rapidly increasing. The students have an opportunity to delve into the IoT world thanks to the IoT partnership between MTG and UCM. The experience of implementing real-world IoT applications has proven valuable. This project has seen praise from not only students and lecturers from UCM but also IoT professionals. Manx Technology Group looks forward to working on future collaborations and projects with UCM.

Matthew Parslow
Matthew Parslow is an IoT Architect at Manx Technology Group. Matthew is responsible for building IoT solutions and has a background in software and website development.