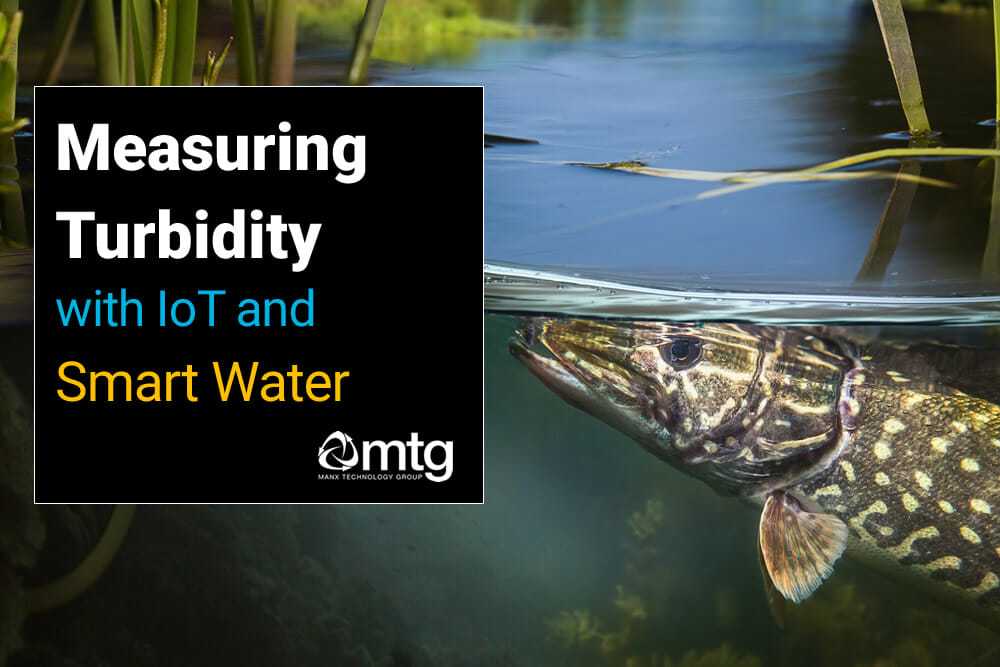 Turbidity is the loss of transparency, cloudiness or haziness of fluid due to the presence of particles that are invisible to the human eye. These suspended solids cause the water to appear murkier, as the turbidity increases. Smart water solutions and IoT have specialist sensors that can measure turbidity levels.

How do you measure Turbidity?

There are different cases where you may want to measure Turbidity. Before we look at a few examples, it is worth explaining the unit of measurement used for Turbidity. Nephelometric Turbidity Units (NTU) is the measurement of turbidity, achieved by shining a light beam through the fluid and measuring the amount of scatter or reflection experienced due to the presence of particles.  The Smart Water sensors from Libelium primarily measure Turbidity using NTU.

(There are other units and methods of measurement including Jackson Turbidity Unit (JTU), Secchi disk and Formazin Turbidity Unit). Measuring turbidity with IoT is one example of Smart Water technologies. We work with our partner Libelium to provide Smart Water solutions that include Turbidity sensors.

Health authorities and Governments prescribe limits to what they believe are acceptable levels of turbidity for drinking water (measured in NTU). Water with high levels of turbidity, not only looks unappealing, but it can also increase the risk of pathogens and other undesirable factors in the water. Although not directly a health risk, turbidity still has an essential element in drinking water supplies.

Many households still use private supplies for their everyday water needs. These private supplies may include wells, streams or boreholes. Much like mains water, it is essential to measure the turbidity of supplies to ensure treatment is effective, filters are not blocked and that the overall quality of the water supply is known.

Many utility suppliers employ different treatment systems to manage turbidity; these can include sedimentors, coagulators and gravel pre-filters. These systems are designed to remove particles from the water and improve the NTU value. Measuring the turbidity of the water before and after the filtration stage is an excellent way to determine their operation and effectiveness. With the standards set for drinking water; real-time and accurate turbidity measurements are invaluable to utility providers. When a utility is responsible for so many bodies of water and an extensive network, monitoring water quality and turbidity with IoT becomes a valuable tool.

During heavy rain showers, you may see clouds of dirt and silt in rivers – this is an indication that both turbidity and suspended solids may have increased. Unlike drinking water, which has stringent targets of 1NTU or lower – water bodies have more modest goals in regards to turbidity. The exact levels vary by country and state; however, it is not unusual to see turbidity limits range from anywhere between 5 NTU and 150 NTU.

A river or lake can suffer from high turbidity due to the presence of silt, algae or other pollutants. High turbidity levels can block out light, impact vegetation, water temperature and the overall health of the water body. The particles causing high levels may also cause an increase in pollutants, metals and bacteria. As a general rule – turbidity can provide an indicator as to the pollution levels of water.

Cows(!) can also cause a rise in turbidity at cattle access points – as this presentation from Dr Ciprian Briciu Burghina has shown.

Turbidity levels play an essential role in the health of fish and other animals. High levels of turbidity impair the vision of predators and prey, which can be disruptive to an ecosystem – if lifeforms are unable to hunt and feed. Turbidity can impact foraging patterns and movement through a water body – as fish are unable to assess their surroundings suitably.

Put another way, imagine trying to swim around a lake that was full of silt – while looking for treasure – this would be impossible to achieve. Operators of fishing lakes and ponds should, alongside other measurements, monitor turbidity levels.

How can I measure Turbidity with IoT?

Once the sensors are deployed (typically on a 5m cable), measurements are taken and transmitted back to a cloud platform or database system. The flexible nature of Plug & Sense means alongside the sensors, you can choose from 3G/4G, Zigbee, WIFI, LoRa or Sigfox communication protocols.

Turbidity data can be viewed on dashboards, visualised or sent using reports. In the event levels increase, alerts and alarms can be generated.

If you are a local council, utility supplier, fishing pond manager or wish to monitor your turbidity levels with IoT – then please get in touch. MTG works with systems integrators and end-users, to design and deploy IoT Smart Water solutions. Speak to our knowledgeable pre-sales team today to advance your IoT solution.

IoTSmart Water
Previous ArticleGoats, rollercoasters and taxation – an AI perspective of the Isle of ManNext ArticleMonitoring air pollution with Internet of Things (IoT)